Isaac’s Tea Trail has been described as England’s last great undiscovered wilderness trek. The trail runs over 37 miles and is mainly in Northumberland and entirely within the North Pennines Area of Outstanding Natural Beauty.

All our Standard Itineraries include:

We will also endeavour to include all these in any custom itinerary you wish to build for this walk. 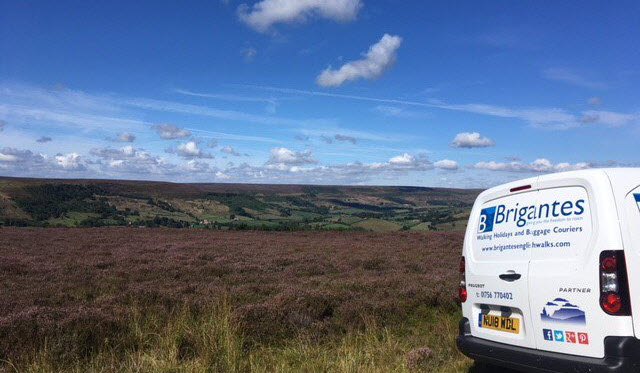 * All headline holiday prices are shown per person, based on two people sharing.

Baggage Transfer is automatically included in the price of all our Walking Holiday packages.

These prices are for anyone planning their own holiday and just need bags moving from one stop to the next.

Note: If you are booking accommodation in an Airbnb, you must ensure that there will either be someone available to take collection/delivery of your bags or that they have appropriate, secure storage in the event that the proprietor is absent.

Rest Days
Rest days can be incorporated into any walking holiday package at an additional £65.00 per person per night

Solo Travellers
Solo travellers please contact us or use the booking form to send your proposed itinerary including dates, and we will price accordingly. Where possible, we take advantage of existing bookings from other clients to ensure you receive a cost effective service.

Alternative Itineraries
For alternative itineraries to those provided for this route, please contact us, or use the Booking Form to submit your proposed itinerary and number of participants and we will quote accordingly.

Walking Season Dates
Prices are based on the walk starting after 1st April and ending before 30th September. For walks outside those dates, please contact us. We provide a reduced out of season service, but still manage to meet the needs of most customers who contact us during this period.

Walk Information
Isaac's Tea Trail has been described as England's last great undiscovered wilderness trek. The trail runs over 36 miles and is mainly in Northumberland and entirely within the North Pennines Area of Outstanding Natural Beauty.
Following in Isaac's footsteps is a great way to discover the comparatively unexplored far North of England, (actually, it is near enough the middle of Britain). Check the map for Allendale and Alston, where the trail reaches Cumbria down the Nent Valley. Other walkers are few and far between, unlike the busier parts of the Lake District and on Hadrian's Wall.
The higher moorland sections offer a challenge, with easier going along the tree fringed river valleys. The trail can be completed over two to three days or longer by doing shorter distances in a more leisurely style.
Isaac's Tea Trail is named after Isaac Holden, an itinerant tea seller and local philanthropist. Isaac was a lead miner, who was forced to find another livelihood, when he faced the twin blows of illness and the loss of work with the closure of the Mohope mine after a slump in the lead trade. His salvation came in a novel way as a door to door tea seller in the Allendale area. At the same time he also experienced a spiritual re-birth, and in common with other folk in the dales became a convert to Methodism, which by the 1800s had become "the religion of the dale".
Fuelled by a religious conviction, he combined tea selling with fund raising for the poor and needy in the East and West Allen valleys. At the same time, he promoted an impressive number of other ventures of wider community benefit. His legacy can still be seen around Allendale at Isaac's Well, in the chapels, where one is now the Allendale Library and the Trinity Chapel still holds regular services. On the corner of the Market Place is The Gift Shop, in the village's old Savings Bank. While tucked away afew yards further on is the churchyard of St. Cuthbert's church and is the splendid memorial to Isaac Holden.
Five miles away at Ninebanks in the West Allen valley, is the hearse house built specially for the celebrated "Holden hearse", near where he worked in his earlier year's in the lead mines. Reminders of Isaac Holden are found in a landscape, which has changed little since Victorian times.
The trail includes the remote farmsteads and fell side mining hamlets, where Isaac delivered tea. During his perambulations, he sold self penned poems and copies of "of his likeness", an early photographic impression to raise money. Nenthead, Alston, Kirkhaugh and Ninebanks, are also places with character that played their part Isaac Holden's life.
In the ups and downs in Victorian family fortunes his cousin (another Isaac), invented looms and manufacured textiles for the Yorkshire woollen industry. The firm of Isaac Holden and Sons generated enormous profits, though little of this wealth trickled down to the Holdens' poor relations at Nenthead. The woollen mills in Bradford, at The Alston Works, (named after the birth place of Holden's father) and also in Keighley, processed the wool from 8 million sheep in a single year with other factories at St. Denis in Paris and Roubaix in Northern France.
The heritage of the North Pennines is well represented on Isaac's Tea Trail with examples from over 2000 years of history with the magnificent Roman Fort of Whitley Castle, the defensive bastle house of Rowantree Stob, and extensive evidence of industrial archaeology and the mining and smelting of lead and silver. A world apart from what has now become one of the most tranquil and unspoilt parts in England.
The trail starts in Allendale at Isaac's Well in the Market Place and goes over to Nenthead and Alston and returns by Ninebanks (YHA Ninebanks). The route is fully way marked and includes distinctive Isaac signs. The higher sections may be remote, but nowhere is more than 20 minutes from a road. Walking boots and clothing appropriate to the conditions are essential and an awareness that there can be sudden changes in the weather.

Mobile Digital Mapping
Digital maps can be viewed on most modern smartphones using an appropriate app, downloaded from the app store associated with your device. Brigantes recommend that whichever app you use, it should support Ordnance Survey 1:25k or 1:50k scale maps. There are many apps to choose from, but the two main providers are Ordnance Survey and Memory Map.

Each provider’s app has its own benefits, but both provide all-important offline navigation, meaning your device does not need a mobile signal to work effectively on the trail.

The Bracken Way is an 81 mile circular walk, from Settle, named after Bracken, the Border Collie of one of the devisers
Click Here

Have you walked this route? Please leave a review and let others know what you think.

Use the comments form below to submit your testimonial for this walk. Rest assured, we won’t display or disclose your email address! It is only required to prevent spam – and to enable you to receive notifications of any responses to your review should you select the option to do so.

One Reply to “Isaac’s Tea Trail”